Where did the Earth’s oxygen come from? New study hints at an unexpected source

The amount of oxygen in the Earth’s atmosphere makes it a habitable planet.

Twenty-one per cent of the atmosphere consists of this life-giving element. But in the deep past — as far back as the Neoarchean era 2.8 to 2.5 billion years ago — this oxygen was almost absent.

So, how did Earth’s atmosphere become oxygenated?

Our research, published in Nature Geoscience, adds a tantalizing new possibility: that at least some of the Earth’s early oxygen came from a tectonic source via the movement and destruction of the Earth’s crust.

This alien Earth was a water-world, covered in green oceans, shrouded in a methane haze and completely lacking multi-cellular life. Another alien aspect of this world was the nature of its tectonic activity.

On modern Earth, the dominant tectonic activity is called plate tectonics, where oceanic crust — the outermost layer of the Earth under the oceans — sinks into the Earth’s mantle (the area between the Earth’s crust and its core) at points of convergence called subduction zones. However, there is considerable debate over whether plate tectonics operated back in the Archean era.

One feature of modern subduction zones is their association with oxidized magmas. These magmas are formed when oxidized sediments and bottom waters — cold, dense water near the ocean floor — are introduced into the Earth’s mantle. This produces magmas with high oxygen and water contents.

Our research aimed to test whether the absence of oxidized materials in Archean bottom waters and sediments could prevent the formation of oxidized magmas. The identification of such magmas in Neoarchean magmatic rocks could provide evidence that subduction and plate tectonics occurred 2.7 billion years ago. 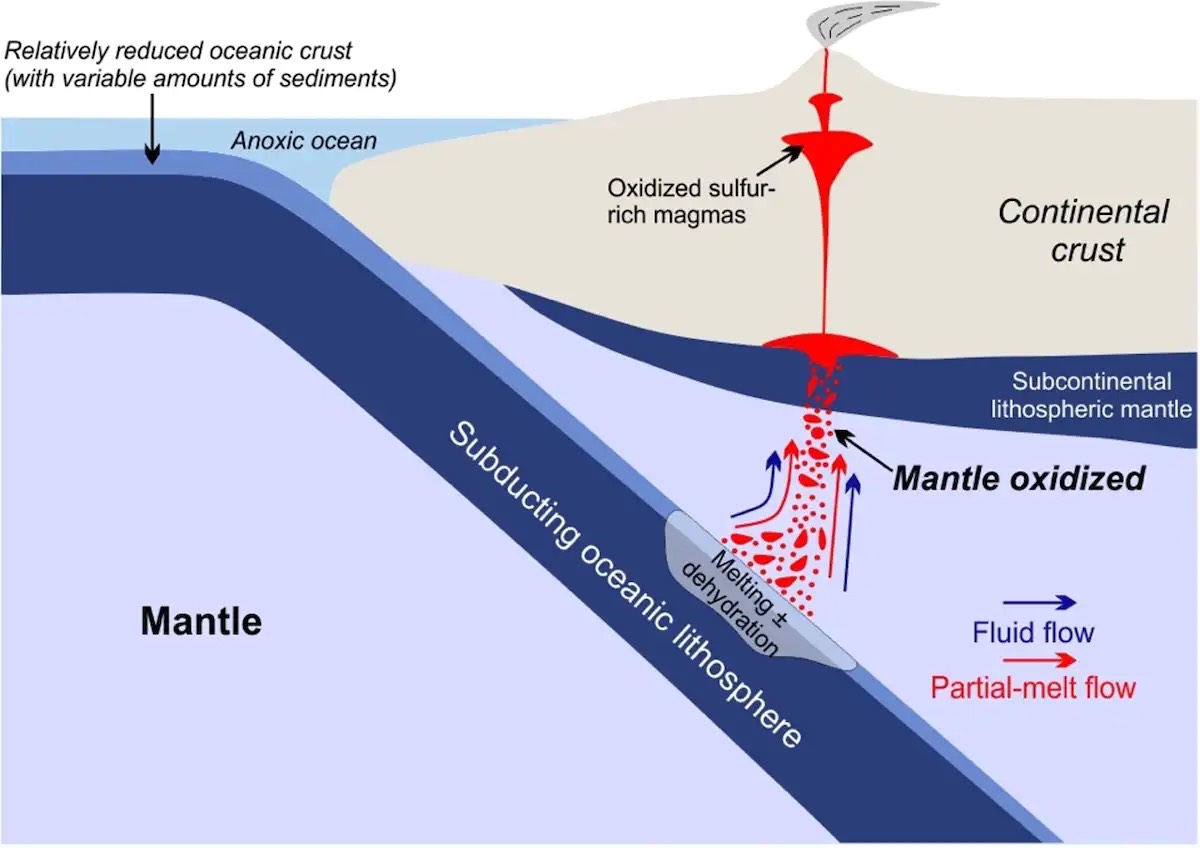 Model of how oxidized sulfur-rich magmas could have been produced in hypothetical subduction zones of Late Archean time. (Xuyang Meng), Author provided

We collected samples of 2750- to 2670-million-year-old granitoid rocks from across the Abitibi-Wawa subprovince of the Superior Province — the largest preserved Archean continent stretching over 2000 km from Winnipeg, Manitoba to far-eastern Quebec. This allowed us to investigate the level of oxidation of magmas generated across the Neoarchean era. 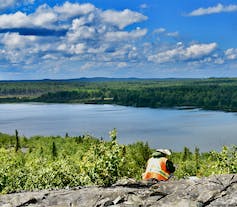 The 2750- to 2670-million-year-old granitoid rocks collected from the largest preserved Archean continent may help reveal the origin story of the Earth’s oxygen. (Dylan McKevitt), Author provided

Measuring the oxidation-state of these magmatic rocks — formed through the cooling and crystalization of magma or lava — is challenging. Post-crystallization events may have modified these rocks through later deformation, burial or heating.

So, we decided to look at the mineral apatite which is present in the zircon crystals in these rocks. Zircon crystals can withstand the intense temperatures and pressures of the post-crystallization events. They retain clues about the environments in which they were originally formed and provide precise ages for the rocks themselves.

Small apatite crystals that are less than 30 microns wide — the size of a human skin cell — are trapped in the zircon crystals. They contain sulfur. By measuring the amount of sulfur in apatite, we can establish whether the apatite grew from an oxidized magma. 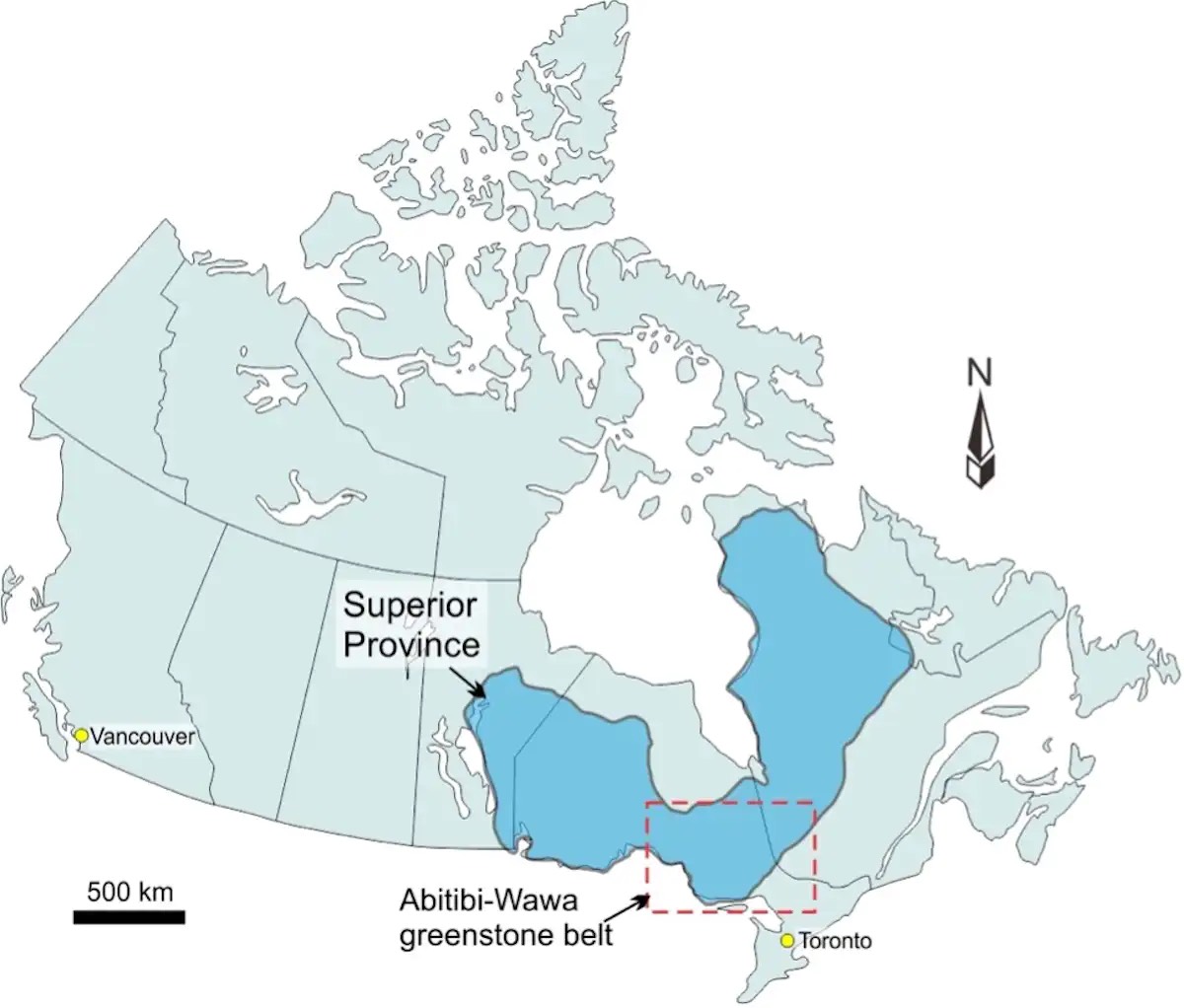 Map of the Superior Province that stretches from central Manitoba to eastern Quebec in Canada. (Xuyang Meng), Author provided

We were able to successfully measure the oxygen fugacity of the original Archean magma — which is essentially the amount of free oxygen in it — using a specialized technique called X-ray Absorption Near Edge Structure Spectroscopy (S-XANES) at the Advanced Photon Source synchrotron at Argonne National Laboratory in Illinois.

We found that the magma sulfur content, which was initially around zero, increased to 2000 parts per million around 2705 million years. This indicated the magmas had become more sulfur-rich. Additionally, the predominance of S6+ — a type of sulfer ion — in the apatite suggested that the sulfur was from an oxidized source, matching the data from the host zircon crystals.

These new findings indicate that oxidized magmas did form in the Neoarchean era 2.7 billion years ago. The data show that the lack of dissolved oxygen in the Archean ocean reservoirs did not prevent the formation of sulfur-rich, oxidized magmas in the subduction zones. The oxygen in these magmas must have come from another source, and was ultimately released into the atmosphere during volcanic eruptions.

We found that the occurrence of these oxidized magmas correlates with major gold mineralization events in the Superior Province and Yilgarn Craton (Western Australia), demonstrating a connection between these oxygen-rich sources and global world-class ore deposit formation. 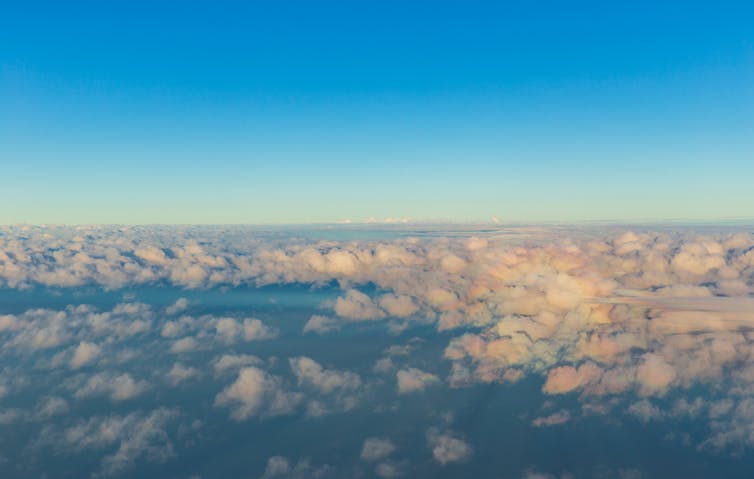 The driving of ocean water deep into the Earth, caused by the sliding of oceanic plates under the Earth’s continental plates, may generate free oxygen as well as the mechanism to release it — volcanoes. (Shutterstock)

The implications of these oxidized magmas go beyond the understanding of early Earth geodynamics. Previously, it was thought unlikely that Archean magmas could be oxidized, when the ocean water and ocean floor rocks or sediments were not.

While the exact mechanism is unclear, the occurrence of these magmas suggests that the process of subduction, where ocean water is taken hundreds of kilometres into our planet, generates free oxygen. This then oxidizes the overlying mantle.

Our study shows that Archean subduction could have been a vital, unforeseen factor in the oxygenation of the Earth, the early whiffs of oxygen 2.7 billion years ago and also the Great Oxidation Event, which marked an increase in atmospheric oxygen by two per cent 2.45 to 2.32 billion years ago.

As far as we know, the Earth is the only place in the solar system — past or present — with plate tectonics and active subduction. This suggests that this study could partly explain the lack of oxygen and, ultimately, life on the other rocky planets in the future as well.

This article is republished from The Conversation under a Creative Commons license. Read the original article.